On Friday, September 16, Florida Congresswoman Frederica S. Wilson will serve as the honorary host of the My Brother’s Keeper Town Hall meeting at the Congressional Black Caucus Foundation’s 46th Annual Legislative Conference. The forum will examine best practices from around the nation and explore how programs are meeting and exceeding the initiative’s benchmarks.

The town hall is being produced in partnership with TV One. In addition to panelists who are experts in education, employment, justice and mentoring programs (see attached flyer), participants will include Rev. Al Sharpton, president of the National Action Network; Broderick Johnson, assistant to the president, secretary of the cabinet and chair of the MBK Task Force at the White House; actor and producer Malik Yoba, star of TV One’s Bad Dad Rehab and Justice By Any Means; Rickey Smiley, nationally syndicated radio personality and star of TV One’s Rickey Smiley For Real; Omari Hardwick, star of the Starz hit Power; Jessie T. Usher and RonReaco Lee, who star in the Starz series Survivor’s Remorse; and Ray Santiago, star of Ash vs Evil Dead on Starz.

Michael Smith, special assistant to President Obama for the My Brother’s Keeper initiative at the White House, will present Presidential Volunteer Service Awards to Louisiana Congressman Cedric Richmond; Fedrick Ingram, vice president of the Florida Education Association; 5000 Role Models of Excellence Project mentor Timothy Belcher; Rickey Smiley and Omari Hardwick. Each man is being honored for his efforts to advance the goals of the My Brother’s Keeper initiative to address persistent opportunity gaps facing boys and young men of color and ensure all youth can reach their full potential.

The town hall will conclude with a special screening of the TV One original movie Bad Dad Rehab.

Who:    Congresswoman Frederica S. Wilson, in partnership with TV One

What:   My Brother’s Keeper Town Hall 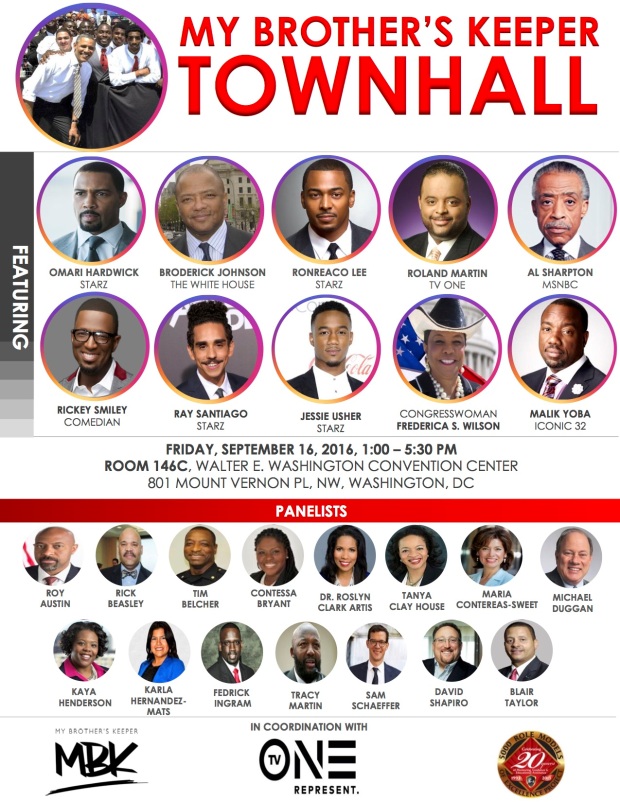