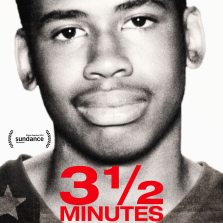 NEW YORK, Nov. 16, 2015  —3½ Minutes, Ten Bullets gives a voice to Jordan Davis’ story, his family and the countless stories like theirs that have happened across the country. The event is intended to spark dialogue amongst viewers and ignite awareness about racial bias across communities.

The film debuts on the three-year anniversary of the shooting. The event will take place at the historic Schomburg Center for Research in Black Culture in Harlem, New York.