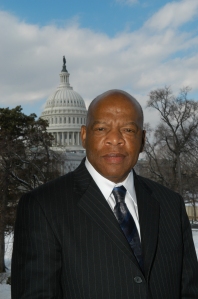 After meeting with students at the high school, Congressman Lewis was sworn in as an honorary member of the 5000 Role Models of Excellence Project, a comprehensive drop-out prevention and  mentoring program for at-risk boys in Miami-Dade County Public Schools.

“It is an honor to have an American hero like Congressman John Lewis visit Booker T. Washington Senior High School to speak to students and to share his experiences in the struggle for civil and human rights.

“For half a century, he has been an extraordinary role model for millions.  As he shares his wisdom and life’s lessons with students at Booker T. Washington Senior High School, it is my hope that the students will become even more inspired and empowered to fulfill their dreams,” said Congresswoman Wilson.

Congressman Lewis is one of this year’s featured guest speakers at Miami Book Fair International which is sponsored by Miami-Dade College. Congressman Lewis is co-author of the #1 New York Times bestselling graphic novel memoir trilogy MARCH, which also chronicles his experiences during the Civil Rights Movement.

Congresswoman Frederica S. Wilson is a second-term Congresswoman from Florida representing parts of Northern Miami-Dade and Southeast Broward counties. A former state legislator and school principal, she is the founder of the 5000 Role Models for Excellence Project, a mentoring program for young males at risk of dropping out of school.  Along with Congressman Bill Posey, Congresswoman Corrine Brown, and Congressman Mario Diaz-Balart, Congresswoman Wilson serves as founding Co-Chair of the Florida Ports Caucus, a bipartisan taskforce that coordinates federal action in support of Florida’s harbors and waterways.