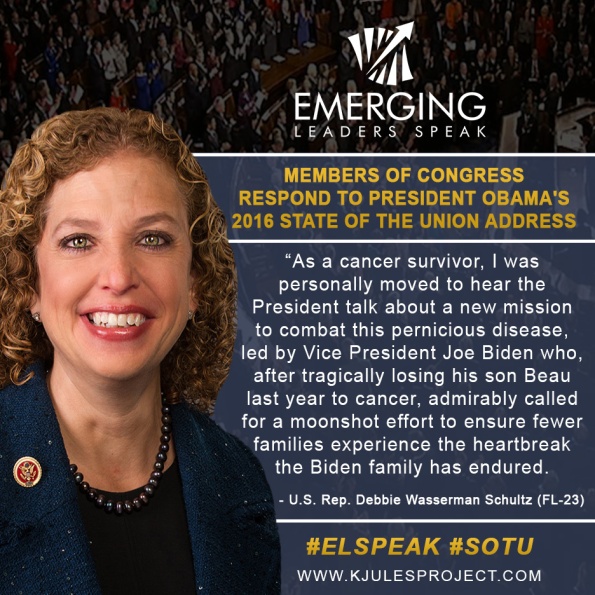 “President Obama delivered a strong, inspirational address to the nation this evening.

“I was thrilled to hear the President reiterate his longstanding calls for comprehensive immigration reform, paid family leave, a higher national minimum wage, and protected and strengthened Medicare and Social Security programs.

“As a cancer survivor, I was personally moved to hear the President talk about a new mission to combat this pernicious disease, led by Vice President Joe Biden who, after tragically losing his son Beau last year to cancer, admirably called for a moonshot effort to ensure fewer families experience the heartbreak the Biden family has endured.

“Importantly, President Obama also spoke about the America he envisions and aspires toward beyond his Presidency, such as fewer deaths from gun violence, more opportunity for more people to get and stay ahead in a strengthened economy, more affordable educational opportunities and solutions to combat climate change. The President eloquently highlighted the unique attributes of our people and our nation – hard work, optimism, innovation and diversity – and illustrated how they will serve us and future generations well into the future.

“And the future of our country is bright because of President Obama’s leadership.

“Listening to the President tonight, I reflected again on his unwavering resolve to bring our nation back from the worst economic crisis since the Great Depression. Seventy straight months of private sector job growth that has led to more than 13 million jobs created. Saving the auto industry. Quality, affordable health care for 17 million more Americans. Enacting important Wall Street and consumer protection reforms. Deficits cut by nearly three-fourths. These are just some of the accomplishments the American people have come to count on from their President, despite Congressional Republicans’ best efforts to prevent him from achieving nearly all of his agenda these past seven years.

“Lastly, it was incredibly important when the President called out politicians who insult Muslims.

“At one point, the President also said, ‘democracy […] require[s] basic bonds of trust between its citizens.’ Of course, demonizing and lying about Muslims and Muslim-Americans is one flagrant attempt to rip those bonds of trust apart, but the President and Congressional Democrats won’t stand for it. And neither do the vast majority of the American people.

“Nearly two dozen of my and Congressman Keith Ellison’s Democratic colleagues in the House and Senate took up our invitation to invite a Muslim constituent to tonight’s address. Hateful rhetoric and ideas driven by fear have no place in our nation and in fact diminish our standing abroad, a message I believe President Obama conveyed forcefully this evening.

“The American people should be proud of President Obama’s accomplishments on their behalf, and know that because of his leadership, our best days indeed lie ahead.”