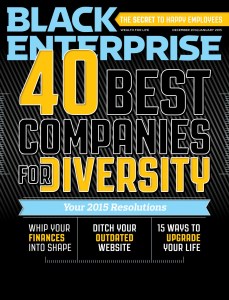 NEW YORK, Jan. 13, 2015 — BLACK ENTERPRISE has released its listing of the 40 Best Companies for Diversity as featured in the publication’s December 2014/January 2015 issue. The companies singled out for distinction demonstrated a significant commitment to diversity in four key areas: board of directors, employee base, senior management and supplier diversity.

In 2005, BLACK ENTERPRISE began publishing its list of the “Best Companies for Diversity,” identifying those corporations that proved to be the best of the best in the developing a culture and executing policies that promoted of inclusion for African Americans within their workforce, senior management ranks, corporate boards and supplier pools. This year the editors placed special emphasis on the impact of millennials on future corporate diversity initiatives and share this generation’s views with its readers.

In compiling this year’s list, the BLACK ENTERPRISE research team found hundreds of companies that refused to take the survey. Some companies did not participate, stating that did not have adequate time to provide diversity figures. Others admitted that their organizations’ numbers simply did not measure up.

The full list of the 2014 Black Enterprise 40 Best Companies for Diversity is as follows:

To select our 2014 companies, BLACK ENTERPRISE sent surveys to the nation’s top 1,000 publicly traded companies as well as to the 100 leading global companies with strong U.S. operations. The questionnaire focused on activities related to the participation of African Americans and members of other ethnic minority groups as defined by the U.S. Census Bureau.  A heavier weighting was applied to the senior management and supplier diversity areas. The final scores, along with the results of reporting and research conducted by the editorial staff, were used to determine the 40 Best Companies for Diversity.

The 40 Best Companies for Diversity will be honored on Tuesday January 13th, 2015 during a special Rainbow PUSH Wall Street Project/Black Enterprise luncheon.

The complete report, including methodology and selection criteria, is available in the December/January issue of black enterprise magazine.