Experts Recommend New Savings and Housing Proposals to Stem Inequality as They Prepare for Summit at U.S. Capitol 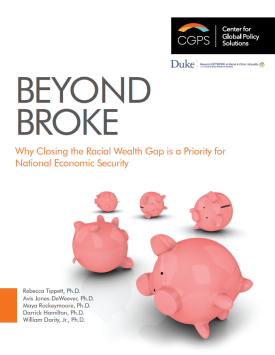 WASHINGTON, April 29, 2014—New analysis of 2011 Census data reveals an acute racial and ethnic wealth gap that is causing a group of leading experts to call for important policy and regulatory changes. In the recovery period following the Great Recession, the average African American and Latino household still owns only six and seven cents respectively for every one dollar in wealth held by the typical white family, an increase of a penny per group since 2009.

The gap is especially noticeable when it comes to access to immediate cash. Over two-thirds of African Americans (67 percent) and nearly three-fourths of Latinos (71 percent), but only one-third of whites (34 percent), are considered “liquid asset poor”, meaning that they do not have cash or assets readily converted into cash that will cover their basic living expenses if they are without income for three months. In fact, the average liquid wealth of whites ($23,000 in cash reserves) is now over 100 times that of African Americans and more than 65 times that held by Latinos.

In order to close this gap, the report, “Beyond Broke: Why Closing the Racial Wealth Gap is a Priority for National Economic Security,” calls for paycheck fairness and living wage policies that close the racial gap in pay and provide more adequate income for lower-wage earners. It also calls for low- and no-cost financial services that help low-income households hold on to their earnings.

Furthermore, the report finds that communities of color paid a disproportionate price for the housing and financial crises but have not yet, and are a long way from, receiving the benefits of the recovery. U.S. Census Bureau Survey of Income and Program Participation data show that between 2005 and 2011, the median net worth of households of color remained near their 2009 levels, reflecting a drop of 58 percent for Latinos, 48 percent for Asians, 45 percent for African Americans but only 21 percent for whites. Steep losses in homes and home equity in the lead up to and during the Great Recession contributed to more dramatic declines in the net worth of households of color.

To address this challenge, the report calls for Congress and the Administration to ensure that future mortgage settlements include the collection of racial/ethnic, gender, geographical and other demographic data in order to ensure that relief programs are transparent, fair, and targeting the hardest-hit communities. The report also calls for the Federal Housing Finance Agency to allow Freddie Mac and Fannie Mae to perform principal reduction and loan modifications for distressed homeowners.

Released as a part of the Closing the Racial Wealth Gap (CRWG) Initiative, an effort to build awareness and support for addressing structural racial and ethnic wealth inequalities, the initiative is organizing a summit, “Shared Prosperity for All: The Policy Imperative for Closing The Racial Wealth Gap,” on May 1 at the U.S. Capitol Visitors Center. The purpose of the summit is to engage members of Congress, congressional staff, the media, and the public in a dialogue about the racial wealth gap, its effect on marginalized households, its impact on the U.S. economy, and solutions.

“Given the anticipated growth of racial and ethnic groups over the next few decades, we ignore the racial wealth gap at our nation’s economic peril,” said Maya Rockeymoore, Ph.D., president of the Center for Global Policy Solutions. “The gap has been created by discriminatory policies and practices that have stood in the way of people of color earning wealth and passing it to the next generation, so it will take targeted policies that mitigate the effects of discrimination to close it.”

“As the economy gradually rebounds from the official end of the Great Recession, the dismal wealth position of many communities of color has not recovered. There were policies that stimulated the recovery for Wall Street; likewise, there are policies that we can enact to end the tide of wealth inequality and ensure opportunity and economic security for all Americans,” said Darrick Hamilton, Ph.D., associate professor, economics and urban policy, The New School, and a lead researcher for the initiative.

The experts believe this study signifies that communities of color have greater hurdles to overcome in their effort to recover from the Great Recession and policy interventions should be designed to meet this need.

This report was prepared by the Center for Global Policy Solutions in collaboration with the Carolina Population Center at the University of North Carolina, Chapel Hill, the Research Network for Racial and Ethnic Inequality at Duke University, and The Milano Graduate School of International Affairs, Management and Urban Policy at The New School.

The Closing the Racial Wealth Gap Initiative is a national collaborative effort managed by the Center for Global Policy Solutions in collaboration with the Insight Center on Community Economic Development and with generous support from the Ford Foundation. The program seeks to build awareness and support for efforts to address racial and ethnic wealth inequalities based on structural factors. To achieve this goal, more than 180 scholars, advocates, practitioners, and other experts of color have come together to inform the national economic debate with diverse perspectives and to provide policy solutions to create an inclusive and equitable future for all Americans.

1 Comment on Latest Research Shows Why Minorities Are ‘Beyond Broke’ As Racial Wealth Gap Persists And Threatens U.S. Economic Security