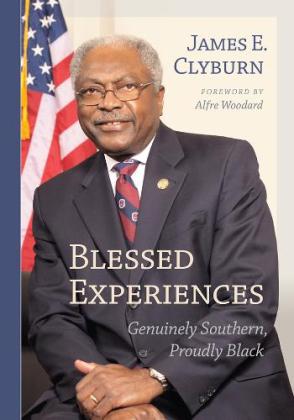 COLUMBIA, S.C., April 30, 2014  — The University of South Carolina Press is proud to announce the forthcoming publication of a new memoir by James E. Clyburn entitled, Blessed Experiences: Genuinely Southern, Proudly Black.  In moving and personal prose, the civil rights activist, South Carolinapolitical icon and confidant to President Barack Obama describes his rise from the Jim Crow-era South to become, as President Obama describes him, “one of a handful of people who, when they speak, the entire Congress listens.”

Clyburn’s narrative recounts his humble beginnings in rural South Carolina and his early involvement in civil rights and public service.  He was elected president of his NAACP youth chapter when he was 12 years old, worked with Dr. Martin Luther King as leader of the Student Non-Violent Coordinating Committee (SNCC), and organized many civil rights marches and demonstrations.  He even met his wife, Emily, in jail during one of his many incarcerations for non-violent protests.

Clyburn went on to become the first black executive on a South Carolina governor’s staff.  Clyburn currently serves as Assistant Democratic Leader, the number three Democrat in the House.  During his career in public service, he has earned a reputation as a fierce champion of education, health care, civil and human rights for all, and as one of the most powerful voices for social justice in America.

Clyburn writes, “. . . this powerful voice came on [the phone]: ‘If you bastards want a fight, you damn well will get one.’  I needed no help identifying that voice.  It was Bill Clinton, the former president of the United States, my longtime political friend. . . His wife, Hillary, had just suffered a major defeat in South Carolina’s Democratic primary, which was supposed to be a test of black political strength between Senator Clinton and a charismatic newcomer, Barack Obama.  Obama had whipped her, and Bill Clinton wanted me to explain why.  I told him I had pledged neutrality and I had kept that promise. I asked him to tell me why he felt otherwise. He exploded, using the word ‘bastard’ again, and accused me of causing her defeat and injecting race into the contest.”

Clyburn also reflects on his turbulent interactions with then-Governor Mark Sanford, his relationship with President Barack Obama and how his upbringing as the son of a fundamentalist minister instilled in him the values he lives by today.

“Blessed Experiences: Genuinely Southern, Proudly Black,” is out May 1, published by the University of South Carolina Press: $19.99 on Kindle; $24.89 in hardcover. http://amzn.to/1iBVDRa

About James E. Clyburn
James E. Clyburn, the highest ranking African American in the U.S. Congress, has proudly represented the 6thcongressional district in South Carolina since 1992.  He is the former Majority Whip, the chief vote counter in the House of Representatives, who secured the passage of an ambitious legislative agenda, including the Affordable Care Act, the American Recovery and Reinvestment Act and the Dodd-Frank Act.  More recently, he has been a national leader in high-level budget negotiations and one of the leading voices for the restoration of the Voting Rights Act.  As one of the chief surrogates for President Obama’s re-election campaign, Clyburn campaigned in swing states across the country to help secure the re-election of America’s first black President in 2012.

When Clyburn came to Congress in 1993, he was elected co-President of his Freshman class and quickly rose through leadership ranks. He was elected Chairman of the Congressional Black Caucus in 1999, and his reputation as a leader and consensus-builder helped him win a difficult three-way race for House Democratic Caucus Vice Chair in 2002.  Three years later, he was unanimously elected Chair of the Democratic Caucus.  When Democrats regained the House majority in 2006, Congressman Clyburn was elevated by his colleagues to House Majority Whip.

He lives in South Carolina, where he and his wife Emily are the proud parents of three daughters, Mignon,Jennifer Reed, and Angela Hannibal; and grandparents to three grandchildren, Walter A. Clyburn Reed, Sydney Alexis Reed, and Layla Joann Clyburn Hannibal.