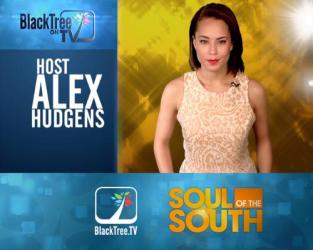 LOS ANGELES, April 30, 2014  — BlackTree TV, the No. 1 destination for African-Americans on YouTube and one of the largest online content providers for urban entertainment and information, today announced the premiere of a television program with recently launched Soul of the South Network. Hosted byAlex Hudgens, ‘BlackTree on TV’ airs weekdays at 5:30 pm and 1 am CT and is the first urban daily entertainment show of its kind.

The program is significant as it marks the first time an urban YouTube channel has launched a daily network TV program with national coverage. The half-hour series will deliver Hollywood news and information using the best of BlackTree TV’s current coverage and deep library of interviews, red carpet arrivals, behind-the-scenes and set visits to give a weekly rundown on the best that Hollywood has to offer.  As part of the partnership, Soul of the South will exploit other powerful web concepts to reinforce its position as a contemporary multi-platform network.

Soul of the South has a lineup of new original programs that will debut with BlackTree on TV. They include politics-driven “DC Breakdown” from the nation’s capital, “Booker T’s Reality of Wrestling,” an unscripted look at the intense world of Southern-Style Wrestling, and “Transform with Les Brown,” returning the legendary motivational speaker to television to turn his inspiring words into real world action.

“BlackTree TV has built a formidable business on YouTube amassing over a half billion cumulative views to date and we think our loyal following will enjoy a longer form TV version of our online entertainment content,” saidJamaal Finkley, Founder of BlackTree TV. “We’re excited to collaborate with Soul of the South, a recognized leader in TV news and information in the urban community, as we continue to expand our brand across multiple distribution platforms. Once more, we look forward to exciting opportunities and synergies that will be mutually beneficial to both organizations in the months to come.”

“Our partnership with BlackTree is important because it completes our early fringe news and information block,” said Doug McHenry, President, Soul of the South TV. “We have national news, we have political talk, and now we can offer to our viewers the latest developments from the world of film, television, music, and fashion. Both of our companies win with this deal.”

BlackTree TV has received more than a half billion views on 17 distribution platforms, including YouTube, iTunes, TiVo, Sony DivX and Boxee. The network is ranked among YouTube’s top 25 content channels with more than 500 million views.

About BlackTree TV
BlackTree TV (BTV) was conceived in a dorm room more than a decade ago and has grown to become the leading distributor of online urban entertainment content and lifestyle information. The company formed a partnership with YouTube in 2008 and has received more than a half billion views on YouTube alone and found on leading distribution platforms, including iTunes, TiVo, Sony DivX and Roku. www.blacktree.tv

About Soul of the South TV Network
Soul of The South TV is the number one source for news, information, entertainment, and culture targeting the African American demographic. Launched May 2013, Soul of the South currently reaches 22 million households in 14 markets, including Little Rock, Dallas, Baton Rouge, Miami, Orlando, Tallahassee, New York City,Philadelphia, Dayton, and Chicago, among others