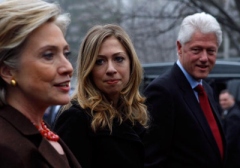 New York, NY (February 13, 2014) –Today the Bill, Hillary & Chelsea Clinton Foundation and the Bill & Melinda Gates Foundation announced a new partnership to gather and analyze data about the status of women and girls’ participation around the world, as part of the Clinton Foundation’s No Ceilings initiative. The partnership was announced during a discussion between Secretary Hillary Rodham Clinton and Melinda Gates hosted by New York University and moderated by Chelsea Clinton.

The partnership teams the Foundations to work with leading technology partners to collect these data and compile them into a compelling and publicly accessible review that will identify the progress that has been made, and the gaps that remain, in the 20 years since the UN Fourth World Conference on Women in Beijing. It will also provide evidence of the strong connection between rights and opportunities for women and girls and prosperity, stability and security around the world.

The data will be released in digital and written forms as part of a progress report in 2015 in advance of the anniversary of the Beijing Conference.

In order to narrow the gender gap and advance the status of girls and women, girls and women must be counted.  Data not only measures progress—it inspires it.

Background on No Ceilings: The Full Participation Project
In 1995, at the UN Fourth World Conference on Women in Beijing, 189 nations agreed to an ambitious Platform for Action that called for the “full and equal participation of women in political, civil, economic, social and cultural life.” At this conference, Secretary Clinton memorably declared that “women’s rights are human rights.”

Nearly twenty years later, progress has been made, with greater participation in public life and nations enacting public policies to promote full equality. Yet for all of this progress, women and girls still comprise the majority of the world’s unhealthy, unfed, and unpaid, and hard-won rights and legal protections remain elusive on the ground. Advancing the status of women and girls remains the unfinished business of our time.

About the Clinton Foundation
The Bill, Hillary & Chelsea Clinton Foundation convenes businesses, governments, NGOs, and individuals to improve global health and wellness, increase opportunity for women and girls, reduce childhood obesity, create economic opportunity and growth, and help communities address the effects of climate change. Because of our work, 20,000 American schools are providing kids with healthy food choices in an effort to eradicate childhood obesity; 21,000 African farmers have improved their crops to feed 30,000 people; 248 million tons of greenhouse gas emissions are being reduced in cities worldwide; more than 5,000 people have been trained in marketable job skills in Colombia; more than 6.8 million people have benefited from lifesaving HIV/AIDS medications; $100 million in strategic investments have been made, impacting the health of 25 million people in the U.S.; and members of the Clinton Global Initiative have made nearly 2,500 Commitments to Action to improve more than 430 million lives around the world.

About the Bill & Melinda Gates Foundation
Guided by the belief that every life has equal value, the Bill & Melinda Gates Foundation works to help all people lead healthy, productive lives. In developing countries, it focuses on improving people’s health and giving them the chance to lift themselves out of hunger and extreme poverty. In the United States, it seeks to ensure that all people—especially those with the fewest resources—have access to the opportunities they need to succeed in school and life. Based in Seattle, Washington, the foundation is led by CEO Jeff Raikes and Co-chair William H. Gates Sr., under the direction of Bill and Melinda Gates and Warren Buffett.