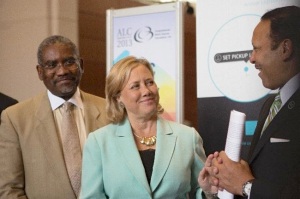 WASHINGTON – United States Senator Mary L. Landrieu, D-La., Chair of the Senate Committee on Small Business and Entrepreneurship, held a roundtable Wednesday focused on finding solutions and best practices for closing the racial wealth gap.   Sen. Landrieu also released a committee report that takes a snapshot of what the current wealth gap looks like and what may be contributing to it.

Sen. Landrieu was joined at the roundtable by Reps. Cedric Richmond, D-La., and Sheila Jackson-Lee, D-Texas.

“Fifty years ago, America engaged in a war on poverty that was aimed, in large part, at closing the economic gap between whites and minorities,” Sen. Landrieu said.  “Since that time, we have made great strides in a number of areas.  The gaps between whites and minorities in income and education have closed.  This is good news, and we should be proud of this achievement.  Yet, data tells us that this progress has not translated into the closing of the wealth gap.

“Closing that wealth gap is a challenge we must meet for America to compete effectively in the 21st century global economy.  We need all, not two-thirds, of our workers, entrepreneurs and businesses playing on the field and not standing on the sidelines.”

The key question Sen. Landrieu and the participants focused on during the roundtable was “what are we doing wrong in regards to solving the wealth gap issue and why isn’t the wealth gap decreasing like other areas, such as income and high school completion?”

The report released by the committee focused on several issues that contribute to the existence of the wealth gap, including:

Sen. Landrieu also sent a letter to 100 mayors throughout America to ask for their ideas and suggestions for best practices and solutions to meeting the challenge of closing the wealth gap.  Sen. Landrieu will take the responses from the mayors, as well as input from those who participated in the roundtable and other key stakeholders and release a follow-up report next year.  That report will detail the solutions, initiatives and programs needed to meet the challenge of closing the wealth gap.

“My work on the wealth gap will not end with the report or the roundtable,” Sen. Landrieu said.  “My committee will continue working on this throughout the next year, so that we can figure out the best ways to provide more opportunities for American families to have the necessary tools to move upward economically into the mainstream and onto the playing field.”

Click here to watch a video of the roundtable.

Click here to see a copy of the wealth gap report.